Madonna gets crucified in more ways than one

By now I am sure you have read or heard about Madonna’s latest stunt. It is all the uproar in the Catholic world and the Church of England. But if you haven’t, here’s how it goes. Madonna has begun a new world tour called “Confessions”. One of the stunts she does involves her mounting a 20foot high mirrored crucifix to sing “Live to Tell.” She also wears a crown of thorns. Behind there were images of third-world poverty flashed across a huge video screen.

She says the reason she did it was to get audience members to donate to her relief charities. She told the New York Daily News, “I don’t think Jesus would be mad at me and message I’m trying to send. Jesus taught that we should love thy neighbor.

Now the pop star who is used to shock and awe is trying to up the anti on her stunts. Probably her fans will enjoy, if you call it that, her show. I just wonder really what she is confessing. And I didn’t even know she had some relief charities, so is she going to donate the 200million she will make from this tour to them? Man how far that would go. I doubt Madonna knows the meaning of sacrifice true sacrifice that Jesus paid by being crucified. It is sad, that she doesn’t know that isn’t it. I guess she likes to poke fun at Catholicism in that she was once one. I don’t think Kabbalah offers her in the end and overall the holy mystery, the love of Christ, that personal relationship with Jesus, and eternal life. I just wish I could share with her what it is to not only know this but experience it.

On writer wrote "that Madonna’s-crucifixion-will unlikely-produce-a-resurrection." He says that she is trying to resurrect her career at 47 years old, by this outrageous act and getting some free press. But the truth is the only resurrection is through Jesus Christ no matter what age you are, and no matter who you are.

Don’t you just wonder what her children think of her or will they follow in her footsteps. Can you see it now? “Now don’t sing as mommy sings, but sing as I tell you too.” "Don't dance as mommy dances, but dance as I tell you to." That will really go over. "Mama, Don't Preach"

But then again, aren't we sacrilegious ourselves with our fancy diamond studded crosses, our fishes on our cars, our teeshirts with Christian logos and sayings, and at the same time we do forget to love God with all our heart, mind, soul, and strength, love our neighbor as ourselves. Perhaps her act can make us pause and think about what kind of message, witness we are giving others.

I just wonder if I could get away with that preaching one of my sermons that way? For one thing, I don’t have Madonna’s body, and I’m glad. For another it would be my luck I would fall. They would have me arrested here in Wadley and locked up in a Looney Bin, “no, no Abi it was Christ who was crucified not Virgin Mary.” And no I am not Madonna either. M-m-m. Just kidding, it would be sacrilegious. But the Vicar of Wadley even though she takes her name from the Vicar of Dibley does not do these kind of acts when preaching or at any other time. Could you imagine the reaction? Madonna who has no reverence for anything but herself does it again.

You can read what other’s have to say here like the Daily Pundit, Cold Fury, Flynn Files, Titusonenine, American Papist , Romancatholicblog, and Show biz daily. Faith Mouse has a faithmouse: The Madonna's True Confessional Tour, In Progress">cartoon about Madonna's Confession tour(see below). 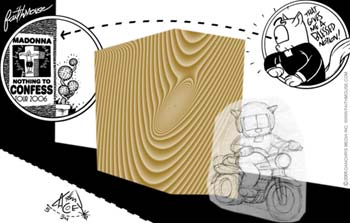 This is a link to a faithmouse: The Madonna's True Confessional Tour, In Progress #2">second cartoon posted about the Confessions tour.


Here is a link to the lyrics to the song she sang on the cross, "Live to Tell"

So just what do you think?
Posted by Unknown at 2:43 PM

Madonna plays with images she doesn't understand. I wonder if her "playing" contributes to her understanding or if the images she mimics in this concert remain just images.
I think her history of wanting to shock us lessens her ability to do so.
She wouldn't want anyone to make light of her deepest values. I wonder why she doesn't respect the deepest values of others.
Prayers for you as you move. Thinking of you in your transition and as you begin your new work.

well put, I agree.
And thanks for the prayers and thoughts for move and transition.